Background: Colonoscopy is the gold standard dia­gnostic method for colon diseases providing an excellent view of the mucosal surface of the colon and terminal ileum. Colonoscopy in children is indicated for dia­gnosis and treatment of gastrointestinal diseases. In this study, we evaluated the reasons for performing colonoscopy in children. Methods: This was a descriptive cross-sectional study including all children referred for colonoscopy to the Gastroenterology clinic affiliated with the Shiraz University of Medical Sciences. The children were selected by a convenient sampling method. Statistical analysis was conducted in the SPSS 22 software. Results: From 389 children referred for colonoscopy, 203 were boys and 186 were girls. The mean age was 8.36 ±4.8 years. The most common reason for colonoscopy was rectal bleeding (63.5%) with the most prevalent dia­gnoses being juvenile polyp and inflammatory bowel disease, each accounting for 11.3% patients. Conclusions: The most common findings of colonoscopy were polyp, IBD and colon inflammation, and the most prevalent symptoms leading to colonoscopy were rectal bleeding, chronic diarrhea, IBD treatment follow-up, suspected IBD and abdominal pain. The high prevalence of pediatric patients presenting with these symptoms indicates the increasing importance of colonoscopy in these patients.

Introduction of flexible sigmoidoscopy (FS) and colonoscopy greatly developed the gastroenterology science by improving sensitivity and specificity for dia­gnosis of gastrointestinal disorders including colon cancer [1,2]. Since its introduction in 1970, colonoscopy has been utilized as a dia­gnostic modality for pediatric colon diseases [3,4]. Colonoscopy is the gold standard for dia­gnosis of colon disease providing high quality view of the entire colon and ileum [5–7]. It can assist gastroenterologists in the dia­gnosis of various diseases including colitis (ulcerative, pseudomembranous, acute bacterial, ameboid, collagenous and lymphocytic, enemas etc.) and Crohn’s disease. Colonoscopy can also be used for dia­gnosis of vascular lesions, hemangiomas, Kaposi sarcoma, colon lymphoma, colon constriction as well as for therapeutic purposes such as stopping colon bleedings, dilatation of colon strictures, decompressing, and polyp removal [8]. In order to perform colonoscopy, the patient’s colon need to be cleansed using specific preparation strategies by administrating oral agents such as polyethylene glycol (PEG) [9,10]. Colonoscopy complications have been noted in 0.4–1.4% of patients [11]. Bleeding after colonoscopy may happen following removal of polyps and due to colon rupture in 0.2–2.5% of cases [12]. Bacteremia may also be seen in 25% of patients under­going colono­scopy [13,14]. Colonoscopy in children is indicated for both dia­gnostic and therapeutic purposes in patients with inflammatory bowel disease (IBD), lower gastrointestinal bleeding, chronic diarrhea etc. [15,16]. On the other hand, colonoscopy is contraindicated in patients with a high risk of intestinal perforation, acute peritonitis, coagulopathies, thrombocytopenia, intestinal ischemia, recent surgeries etc. [17,18]. Therefore, colonoscopy imparts an essential role in both dia­gnosis and treatment of various gastrointestinal diseases in children. There is little information on the causes and indications of colonoscopy in Iranian children. In this study, we aim to describe various indications for performing colonoscopy in children referred to the gastroenterology clinic of the Shiraz University of Medical Sciences as the center most referred to in the south of Iran.

This was a descriptive retrospective study including children aged <18 years referred to the Gastroenterology clinic of the Nemazee Hospital affiliated with the Shiraz University of Medical Sciences during 2015 until 2017. Overall, 429 children were referred to the clinic during this time, out of which 30 were excluded because of incomplete data. Finally, 389 children were included. The data was collected using a researcher-made questionnaire addressing variables including age at colonoscopy, sex, colonoscopy indication, colonoscopy findings, complications, and final dia­gnosis. Statistical analyses were performed in IBM SPSS Statistics version 22. Normality of the data was checked by the Kolmo­gorov-Smirnov test. Independent samples Student’s t test was used for inferential statistics. 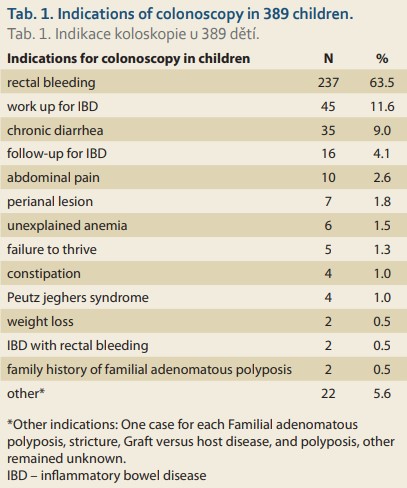 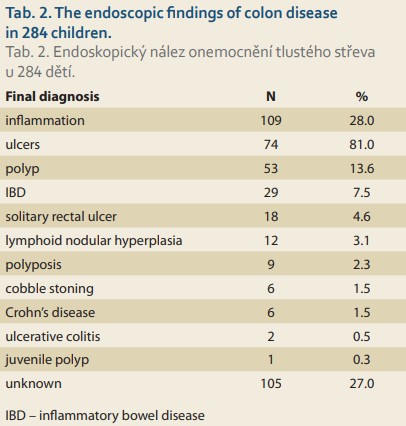 The most common findings of colonoscopy were colon ulcer, polyp, IBD, and colon inflammation and the most prevalent symptoms leading to colonoscopy were rectal bleeding, chronic diarrhea, IBD treatment follow-up, suspected IBD and abdominal pain. The high prevalence of pediatric patients presenting with these symptoms indicates the increasing importance of colonoscopy in these patients.


To read this article in full, please register for free on this website.

Copyright 2009–2022 Care Comm s.r.o. All rights reserved. Publishing or distribution of the website is prohibited without the written consent of the editors.