Case report of melanoma metastasizing to the pancreas

The differential diagnosis of solid pancreatic masses is notably problematic, given the broad spectrum of possible malignant and benign etiologies. Metastases of other malignancies constitute less than 5% of pancreatic lesions, with metastases of melanoma being among the least common. Melanoma is generally diagnosed via careful examination of the body surface. Exceptions to this include ocular and mucosal forms, cases with spontaneous regression of the primary site, and cases missed because of insufficient physical examination. We present a case of a symptomatic solid pancreatic mass, diagnosed by endosonography with fine needle aspiration biopsy, as a rare metastasis of malignant melanoma. The primary skin tumor was thereafter detected after careful physical examination. Timely skin examinations could lead to earlier diagnosis without the need for expensive and invasive procedures such as endosonography with fine needle aspiration biopsy. This case report stresses the general importance of careful skin self-examinations and skin examinations by physicians, beginning with general practitioners. This case also highlights the potential importance of performing a skin examination (an inexpensive and simple tool) when investigating pancreatic masses, as metastatic melanoma should always be considered a possibility during differential diagnosis.

A solid pancreatic mass can present a differential diagnostic challenge, given the broad spectrum of possible malignant and benign etiologies [1]. Metastases of other malignancies constitute less than 5% of pancreatic lesions [2]. Metastasis to the pancreas has been reported to occur from a variety of primary neoplasms, such as renal cell carcinoma, lung, colon, ovary, breast, and many others, including rare cases of metastatic melanoma [3,4].
Melanoma represents a highly malignant disease generally diagnosed through careful examination of the body surface. However, in some cases, the primary site of melanoma is not detected and diag-nosis results from evaluation of the metastatic site after it becomes symptomatic – including metastases to the pancreas. The primary site can be either truly undetectable or missed due to an insufficient physical examination.
Increasingly rapid advancements in medicine have contributed to indisputable progress in our diagnostic and therapeutic options. However, excessive specialization and focus on separate organs and/or organ systems may lead to the loss of complex conceptualization of the patient and to a marginalization of the physical examination as an important diagnostic tool. We present a case of a symptomatic solid pancreatic mass diagnosed as a rare metastasis of malignant melanoma with the primary tumour detectable in case of careful physical examination.

A 71-year-old female with a history of mild dyspepsia for several weeks was examined by her general practitioner for sudden onset of painless jaundice. She was sent to the infectious diseases department to exclude infectious hepatitis, results of which were negative. Abdominal sonography revealed dilated biliary tract and a possible mass in the head of the pancreas. The patient was then referred to the internal medicine department for differential diagnosis of obstructive jaundice. CT scan verified a solid pancreatic mass with adjacent malignant-appearing lymph nodes (Fig. 1). CA19-9 was only mildly elevated at 242 U/ml. As pan-creatic adenocarcinoma was suspected, the patient was then referred for consultation with the oncology team of a complex oncology centre. Lymph nodes were not judged as clearly ma-lignant and the patient was scheduled for endosonography (EUS) with a fine needle aspiration biopsy (FNAB) (Fig. 2 and 3) to verify the diagnosis and de-termine resectability; and also for endoscopic retrograde cholangiopancreatography with duodenobiliary drainage.
At this point in her evaluation, the patient presented to gastroenterology to analyse the results with the possibility of surgical treatment. The FNAB revealed surprising results – malignant mela-noma, most likely metastasizing (Fig. 4 and 5). A thorough skin examination identified the primary site of melanoma – a 10mm tumour on the right arm, with already-enlarged lymph nodes in the right axilla.
The patient was sent for further con-sultation at an oncology centre specializing in the treatment of malignant melanoma. Restaging yielded no evidence of metastasis to the brain but revealed significant progression of metastatic involvement of the lymph nodes in the abdominal cavity, with ascites and painful metastases in the right axilla. Due to poor health status and risk of further decompensation, the patient was only treated with palliative radiotherapy focused on the right axilla and repeated paracentesis of the ascites; chemotherapy and immunotherapy were not indicated. She is currently provided with supportive hospice care following radiotherapy.

Solid pancreatic masses present an inherent differential diagnostic dilemma [1]. A combination of cross-sectional imaging methods and EUS with the option of FNAB proves to be diagnos-tic in most cases [5]. Pancreatic adenocarcinoma represents most cases, less than 5% are metastases. This potentiality should always be considered, especially in patients with a history of malignancy [2]. Imaging methods often prove useful in the differential diagnosis of metastasis vs. primary pancreatic cancer; however, there are no definitive indicators for conclusively diagnosing a pancreatic mass as a metastasis [6].
Similarly, EUS characteristics of metastatic pancreatic lesions seem to differ from those of primary pancreatic lesions. Lack of main pancreatic duct dilatation and tissue atrophy, and well-defined margins are often attributed to metastatic lesions rather than pancreatic cancer [3,7,8]. However, the characteristics may differ between par-ticular types of metastases and, therefore, cannot be considered clearly diag-nostic, and obtaining tissue is usually necessary. Thus, today the role of tissue sampling during EUS (fine-needle aspiration, fine-needle biopsy, tru-cut biopsy) is irreplaceable [3,7,8]. EUS and EUS-fine needle aspiration diagnostic rates may be further improved by new technologies, such as contrast-enhanced EUS, elastography and needle confocal laser endomicroscopy [9]. However, the true impact of these methods needs to be validated through further studies.
Renal cell carcinoma consistently represents the most common primary neoplasm, followed by lung, colon and breast, according to some studies [4]. Cases of melanoma metastasizing to the pancreas, such as in the case presented here, are considered quite rare [2].
Malignant melanoma is a lethal disease with generally unfavourable outcomes and an increasing incidence [10]. The most common form of melanoma is cutaneous (> 90%), followed by ocular, mucosal, and that of unknown primary origin [11]. Malignant melanoma is a tumour with a significant metastatic potential. Distant organ metastases predominantly form in the lungs, central nervous system, liver, bones and GI tract [12]. Pancreatic involvement (especially isolated) is considered quite rare, however, metastases of melanoma constitute 7% of secondary pancreatic tumours by some authors [3]. The time interval between the primary tumour and pancreatic metastasis varies widely, between 2 and 28 years [13]. Predo-minant sites of metastases differ between types of melanoma. Pancreatic metastases occur in less than 2% of patients with visceral melanoma meta-stases and the majority of them disproportionately originate from primary ocular melanoma [14].
In addition to oncology treatment, a surgical resection represents a valid option in cases of isolated pancreatic metastases. Several retrospective studies have suggested increased survival following complete resection of the metastasis [15]. Patients with metastases of renal cell carcinoma seem to have a more favourable prognosis than patients operated on for metastases of a different origin [16–18]. The prognosis of patients with pancreatic metastases of malignant melanoma is variable and unpredictable, and there is very little literature on long-term results of pancreatic resection for metastatic melanoma. Some authors suggest only palliative relief of symptoms, while others document the potential benefit of longer survival [19–22]. Some studies of patients with pancreatic metastatic melanoma with complete and incom-plete resection indicate a median survival time of 24 and 8 months with a 5-year survival rate of 37 and 0% resp., suggesting that complete resection can improve survival rates [13,23].
In some cases, however, the primary site of melanoma is not detectable. In such cases, diagnosis occurs via examination of the metastatic site after it becomes symptomatic. The primary site can be either truly undetectable by examination of the body surface (ocular or mucosal melanoma, spontaneous regression of the primary tumour [24]) or missed due to an insufficient physical examination. In the case of pancreatic metastasis of melanoma, it may be appropriate to rule out its ocular form since it seems to spread to the pancreas more commonly [25].
Significant advancements in the field have generated great progress in our diagnostic and therapeutic options. However, excessive specialization and focus on separate organs and/or organ systems may lead to the loss of complex conceptualization of the patient and marginalization of the physical examination as a diagnostic tool. Our case report highlights the continued importance of careful physical examination, including careful skin self-examination and examination by the physician. This inexpensive and simple tool can also play a surprising role in the assessment of pancreatic masses, given the potential for metastatic melanoma as a diagnostic consideration. In our case, timely skin examination (ideally during the initial visit with the general practitioner) could lead to earlier diagnosis of melanoma without the need for expensive and invasive procedures such as EUS with FNAB. 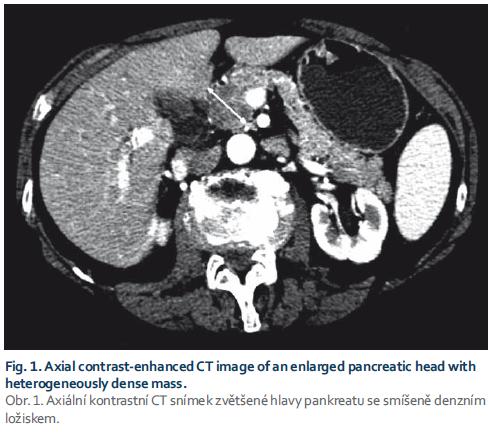 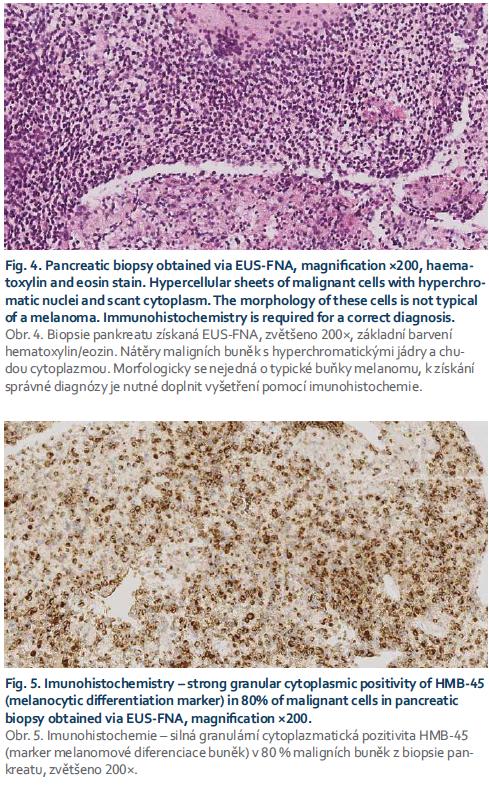